What is Exiled Kingdoms

Exiled Kingdoms is a single-player action RPG for Android devices (and soon for iphone/ipad/mac/PC as well). 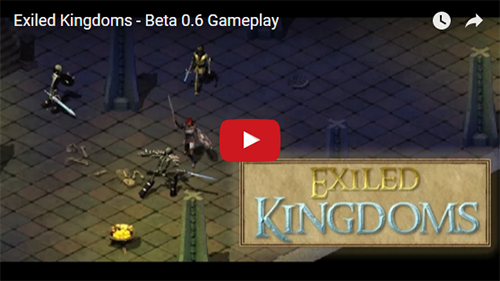 - Real Time combat. The game isn't turn-based. You got to swing at things and actually hit them to kill them. You control a single character, although you may have companions following you.

- Isometric perspective. Graphics are 3D pre-rendered. This is a similar technique than the one used in games like Diablo, Baldur's Gate or Icewind's Dale. And yeah, those games from the Golden Age have been a great inspiration for me during development.

- Open Ended. Roam around freely, explore, get lost... Forget about saving the world while you hunt bounties, get involved in quests or simply talk to people and learn about the Kingdoms. Some of the content is generated on the fly, so you'll never run out of stuff to do...

- This is a challenging, hardcore roleplaying game. Meant for hardcore fans. Your path isn't spelled out for you; and some fights will be hard. You'll get stuck. You won't easily find some things. I hope you can enjoy that kind of thing

- The Public Beta was released on Android Play Store on December 20th, 2015.

- The game is available in both english and spanish languages. You may just switch languages from the Settings menu.