Vampire Mage, but not really...

If you can kick it it's a job for the guys with spanners.

But IMO the pinnacle of companion AI was... 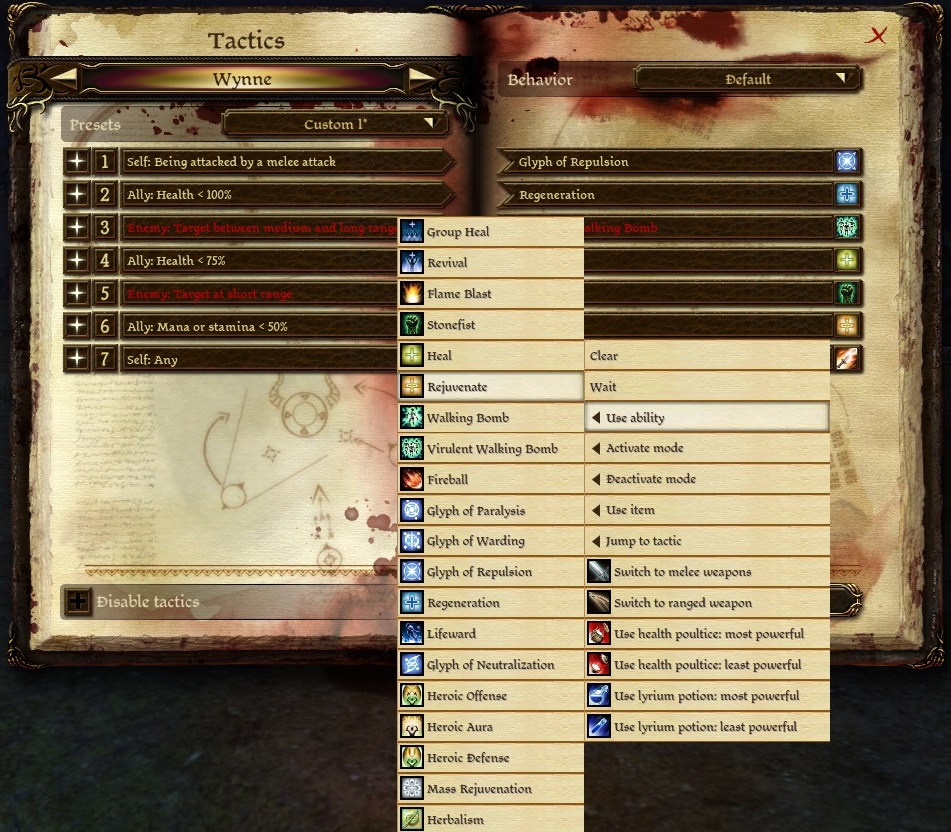 Dragon Age: Origins uses a Tactics system to enable you to automate how your characters behave (mainly in combat). This allows you to setup your party members to work together efficiently without needing constant direction. If the game is too challenging, consider redesigning your tactics. For...

My favourite was "Ballbiter", my Mabari war hound, whose first condition was to ignore everyone and attack mages. Being a dog and no ranged capability he'd gallop up to and, well, he'd live up to his name. (Not even really to kill them, just to interrupt their spells). I can't remember the exact conditions I used but I think it was to Charge Mages then Overwhelm and Shred in combat, so it would just fight as normal but it would target Mages thanks to Charge.

That's where the Vampiric powers of Odie will come in! We'll wire his left hand to the Ark's powerbar while we throw goblins to his right so he stabs them with his Death Blade! Their lifeforce will be channeled right into the ship's battery!

If goblin blood doesn't work, I need you to get us a bunch of Spark Elementals

*Whispering*
I might have a job for you...
I'm looking for a guy to hack the Ark.
Dare to put your coding skills to the test?

We're gonna steal us a ship!
Click to expand...

ohh are you still trying to do that damn bank raid??

@Rk01 Oh no no don't worry, that last plan was craaazy.

This one is GUARANTEED to work!

We repair the Ark, @stonedwolf hacks its mainframe, we power it with Spark Elemental blood thanks to @IAmOdie's new vampiric ability, while YOU steal a Numina Stone and kidnap a Dimensional Parasite by opening the Deep Gate.

Then we feed the stone to the horror and watch what happens. I'll be taking notes. Can't wait to find out what an Horror God looks like!

VDX_360 said:
@p4ran0id , Ssssshhh! Let him take on the Steel Spiders and find out

Arcane Knights that choose death weapons will struggle in areas where death damage is moot. That's part of the pros-and-cons of mage builds.

Thankfully, a mage doesn't loose the ability to use wands/staffs/spells, so they may have to go with a back-up option to take on some areas.
Click to expand...

Pardon the late reply. Steel Spiders are the second thing I have to worry about the most, especially if Iron Golem would be an option. The entirety of Forbidden Pit would be the true headache, here, and I feel like the Companion wouldn't be much help, either, not even Hirge. And then there is also the Sewers of Horror, as well as Elemental Plane of Fire that I have to worry about.

Between Wand, Staffs, or Spells, which one is better for an Arcane Knight? I'm inclined to use between Staffs and/or Spells, especially Lightning one for the latter case.

Apocalypse said:
There used to be a mage companion. But as soon as he joined the first player he polymorphed him into a pig and teleported out. He was never seen again. It is said the pig can still be found roaming endlessly in Thuram...

Never trust a wizard.
Unless it's me.
You can always trust me.
Click to expand...

This is actually an interesting point. When we pointed out to Ilemma about the possibility of her polymorphing spells to permanently change Rosy into a pig, and insisted on it, she was so mad that she sent you out far off Icemist, to the South, Friguld. But what if Gurr is actually the living proof of the successful and everlasting polymorphing spell that Ilemma created, and Primzar perfected it?
Last edited: 19/01/2023

@IAmOdie on the last run I did recently with Arcane Knight, to eliminate a steel spider I was using either: two lv3 Lighting bolts and one hit with Hunter's Machete, or lv3 Combustion, and lv3 Lighting bolt, and few hits. First method requires some running, second uses more mana and has a tedious cooldown, but both allowed me to fight efficiently. You could probably get successful with using Death Fog + Lighting bolt + wand combo. As for the Forbidden Pit: Death Knights are screwed here. The best you can do is getting Hirge with Paladin Sword, death resistance gear, Crusader 3, Intervention 3, and bravely make her drink mana potions, and annoy the heck out of shadows with that Branch of the Holy Tree xD

Guys guys, you're doing it wrong...
Killing Steel Spiders is super easy, barely an inconvenience! Just have a good ol' Mage Barrier active and ignore them! They'll blow themselves up lol

Apocalypse said:
Guys guys, you're doing it wrong...
Killing Steel Spiders is super easy, barely an inconvenience! Just have a good ol' Mage Barrier active and ignore them! They'll blow themselves up lol
Click to expand...

Atomos said:
@IAmOdie on the last run I did recently with Arcane Knight, to eliminate a steel spider I was using either: two lv3 Lighting bolts and one hit with Hunter's Machete, or lv3 Combustion, and lv3 Lighting bolt, and few hits.
Click to expand...

Combustion 3? But they take no Fire damage, and Combustion 3 takes massive mana. What I did for those damn spiders was simply Zap 3, run, zap 3. Then if there's some Steel Wizards, Sparkling 1 and basic staff hits. Sometimes just 1 zap and a few hits with my tesla staff.