Here is my final warrior character. My previous warriors were two handed and honestly, I loved this one a lot! 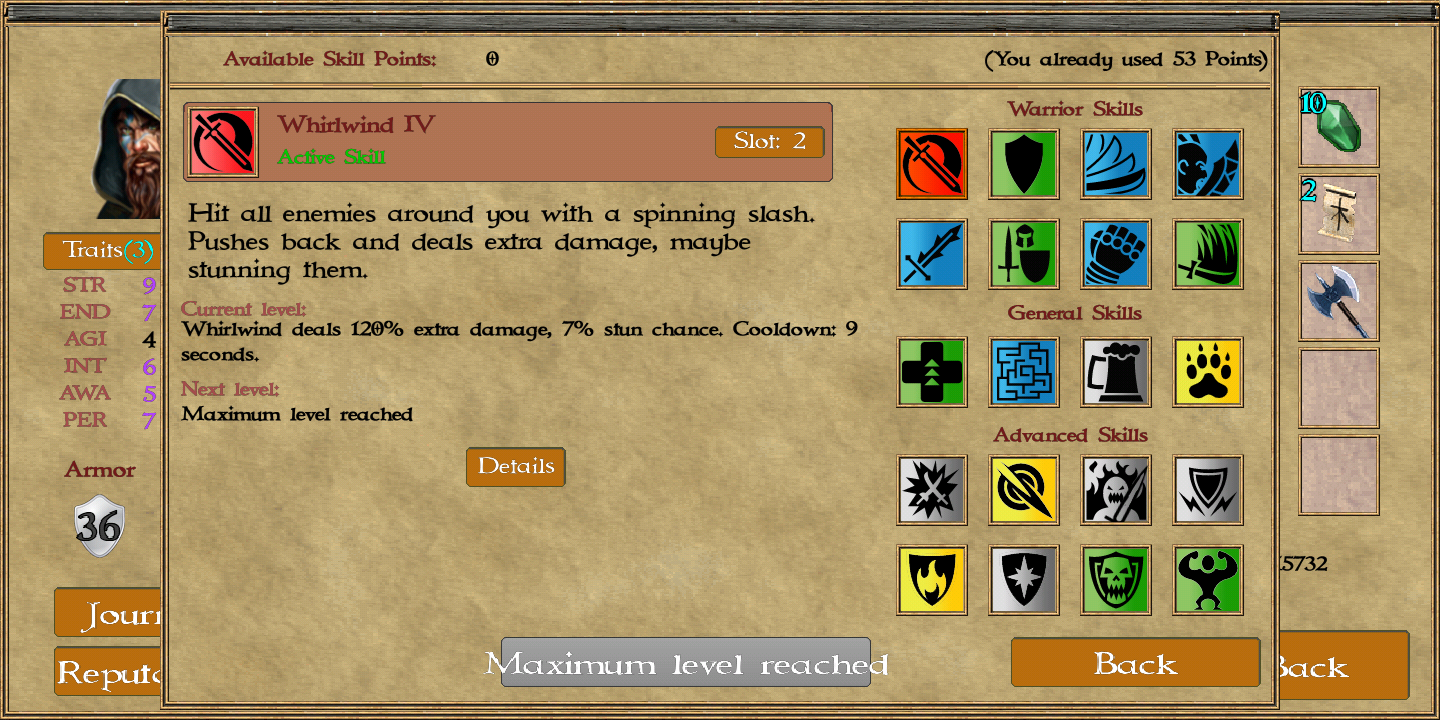 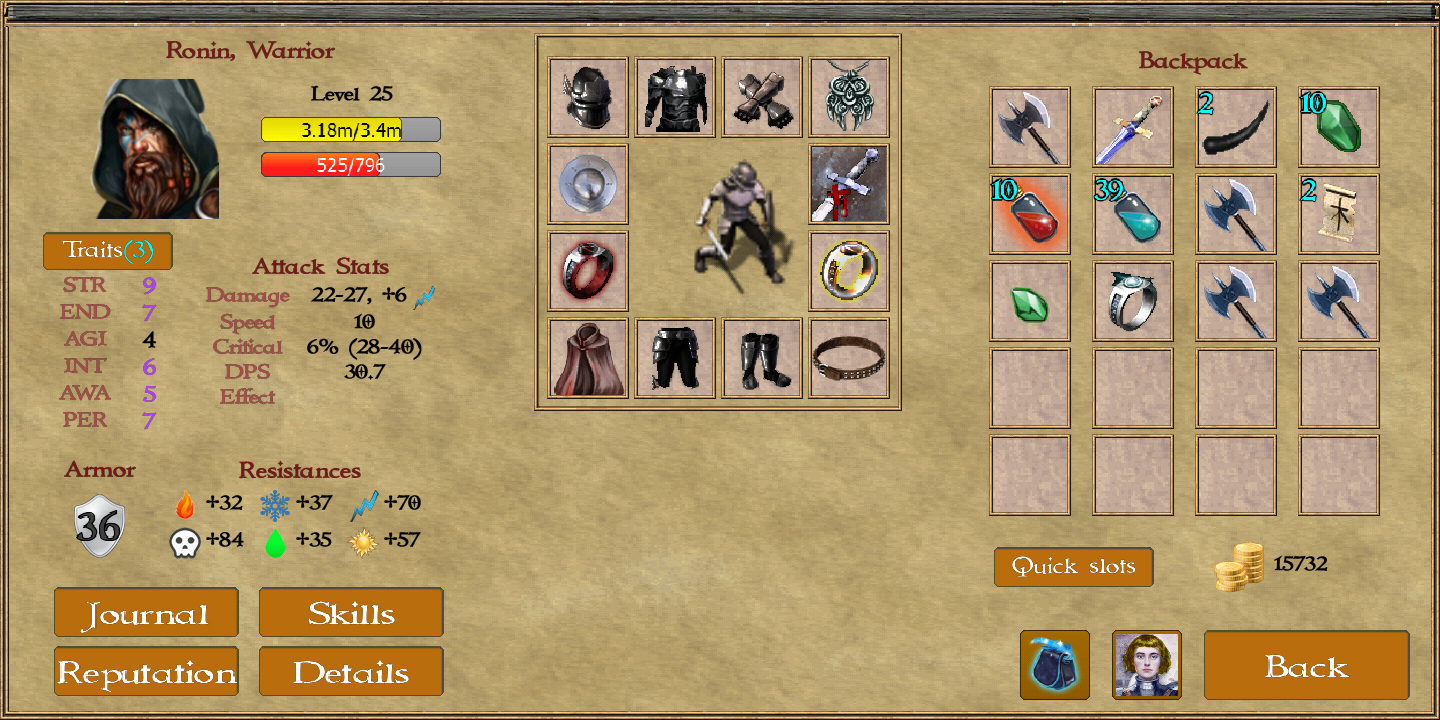 Post automatically merged:    10/02/2022
I didnt realize at first that you can build traits beyond level 5 so I reassigned strength and other stats for my warrior build to be a heavy hitter. I maxed several attack skills and I am currently at level 25 and 200,000 xp away from 26. I tend to favor all armor/ accessories that have the wisdom trait so that I can gain xp as fast as possible. Still need to do the ark and the junior demon in the ice fortress.
Click to expand...

bro I spent a long time trying to understand your build, each one really builds their character as they like, but as a constructive criticism, your one-handed warrior and shield is too weak for your level, you can of course redo this skill build both common and advanced and make your warrior much stronger than this current build!

This is my final cleric build. Honestly, I was too lazy to kill time in Ark to get the best gear. Single and double hand have same DPS for this build so I switch to 2H only when using the might.

Gained a level a while back but I’m complete now. Rogue, Hirge as my companion.

Location
Somwhere under the Rainbow,lurking down an alley..

Hello everyone, new member to forums but been playing EK awhile.
My question pertains to general skills, specifically the `fourth` skill slot, looks like a bearpaw.
I noticed it on several players uploaded images but for the life of me i cannot find any mention of it on the wiki or im looking in the wrong area.
Any insight would be grateful

LegendarilyEpic71 said:
Hello everyone, new member to forums but been playing EK awhile.
My question pertains to general skills, specifically the `fourth` skill slot, looks like a bearpaw.
I noticed it on several players uploaded images but for the life of me i cannot find any mention of it on the wiki or im looking in the wrong area.
Any insight would be grateful
Click to expand...

Location
Somwhere under the Rainbow,lurking down an alley..

Thanks alot Atomos.
Need to travel to the west now and look into this °~°

Hi all.
I'm currently running one of each character type in different save slots up to about 7 levels each at a time, then 14 with the warrior I was having fun with but wishing I had more granular control over Adaon at times, has sent me back to my original rogue that I've now brought up to level 14 too.

Herein lies my dilemma; I'm running the following stats with 4pts in hand to allocate and with three pertinent ones set at 3 (and the rest 2), I'm torn on whether to boost Per, Int or Agi.

Having come back to the game relatively recently after originally playing years ago, I remember the Per 4 check lets me get the best result with the actors on stage for example, which is on my agenda at some point but I'm a screen away from a Hill Giant rumour boss with Hirge in tow (channelling Griss, one-handed with a board) using a bow, making Agi a very attractive prospect.
Just kicked myself at the last level up for not placing the Int points that could have saved me 3000 5 saves later doing the New Garand Temple, I throw my thought process here in the hope that it might help me gain any insight from others.

[Edit] Now I've realised I hsve a similar dilemma with the skills too!
I've maxed Kick, Gossip and Dungeoneering so far and have 3 points to do the first extra recovery I've found very useful with other characters but being reliant on my bow, an Archery boost might negate so much need for it. Stab, Stealth and Sneak Attack are sitting at 2 too and I've not trained Evasion, Trap Master or Sprint at all yet, so 3pts across those could add quite a bit at this point too.

Tough choices! Appreciate any help.
[Edit2] Almost forgot, End and Agi both have a point boost from gear. I'll try to add screenshots if I can after.
Last edited: 09/10/2022

As far as stats are a concern: you can do all the quests that require high personality/intelligence/awareness, and then reset the stats, unless you like the benefits of having them (bonus resistances, bonus XP gains, trap detection respectively).

For the skills: I suggest saving a game, resetting the skills, and experimenting to find out what works for you best, and which skills are redundant. Later on, you can reload the game, or pay some extra gold to get another skill reset, and a choice again
Share:
Facebook Twitter Reddit Pinterest Tumblr WhatsApp Email Share Link