Just got my Ironman cleric to the ashen cape, posting this now in case I die there

Finally beat the game on iron man! Did it in 166 days

After completing the game on Hard with a wand mage and a melee rogue, I tried a cleric, but got bored. The 2-H warrior just feels right. At level 16 Commius is destroying everything he meets. He has nine of the shards, and will get the last three very fast now. His stats are:

He cleared out the Mercian Royal Crypt, and then went onto the Mausoleum, garnering a lot of Large Emeralds while getting fire resistance gear (five on one run!). Next it was the Golden Cove Bank and then the Crypt again for that key. Remarkably he had 30 Large Emeralds!

This necessitated a visit to the Maze of Lamth. After getting a pretty ring for Hirge, Commius had an unfortunate argument with the Priest. One thing led to another, and in all innocence when he tried to clear up the misunderstanding with High Priestess Br'mee he was assaulted by an angry guard — more bloodshed! But surely he could clear things up with King M'dmoo… such refreshing innocence. The upshot is that he now has an awesome axe and a lovely cape, while Hirge glories in his old +2 STR belt.

In all honesty, it's not the most honourable episode in his career, but then the choices made around the Amulet of Dark Whispers aren't exactly noble either!

Yesterday I got Commius through the initial stages of the Ark; it was hard work. It made me nostalgic for the wand mage who was taking 1 hp a shot from battle droids (potions of shock weren't needed). She hasn't done the sewer yet, and that's a goody bag in terms of getting a lovely new wand. She's my third wand mage (the second on hard). I find it one of the most satisfying builds to play:

The mana drain on this build is generally low, and she can grind economically when needed. She's found everything she wants in the Arc and the Sunken Citadel. The important equipment are the Plexifiber Robes, the Automated Gloves and the Force Belt.

She's been using Grissenda, who has Automated Gloves too and Infantry Training, but not Body Development; Ishe doesn't share the Tolassian Tomes.

Yesterday I took Angharad through the Arc and then did the Forbidden Pit; at one point she was on 1 hp at the end of a fight. I had to retreat before the final fights, as she had only 3 Circles of Restoration (she also respecced Hirge to make her immortal); fortunately the dungeon didn't reset.

Reading the Witcher series sparked my interest to resume a rogue archer that had got to Level 17 and then my interest stalled. I wasn't making much progress in the Arena, which is a benchmark for me. I respecced her to match Angharad in some ways (getting Body Development and Massive Criticals); it was what was needed:

Before the respec, AGI was 6, STR 0 and END 2. I had only Rapid Fire III and Magical Training III as advanced skills (along with Dungeoneering I). All remaining trait points will go into AGI.

I only use two bows, Wyrmslayer and the Silver Bow of Malan. The Mist Hunter's one will come out for the Arc, and I have used the Jester's Bow with poison, which is fun. For her main compainion, she's using a 2-H Grissenda build (extra stunning!).

Meinir matched Angharad before the respec by getting through the Outlaw Chief fight in the arena on 1 hp. Still building my skill with kicks; the missing is painful. It's great to travel at a sprint and setting up fights with traps is lots of fun. 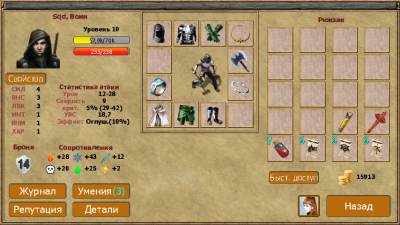 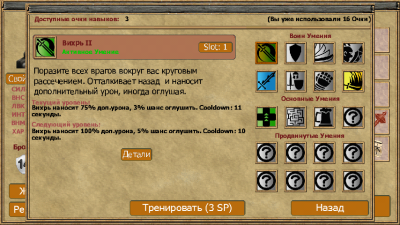 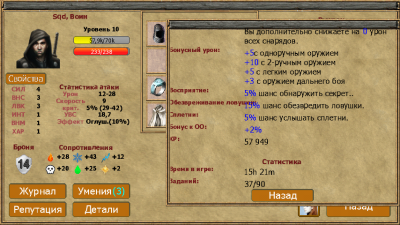 Two-Hand Warriors get little benefit from Agility. Agility does not increase 2-Hand weapon damage. It does increase armor and trap dodge a little. See here.

Extra Recoveries can be useful, they help with longer dungeons.