So, with the level cap removed and newfound will to grind and reach new heights, I've decided to share the build that I've been using so far as a level 25 two-handed Greataxe Warrior. It's a jack-of-all-trades kind of build that focuses on high overall damage with bursts of damage steroids and tankiness when necessary. Below is a list of my traits, gear and skills and my explanation for them. Anyway, here's my level 25 Berserker, tell me what you think.

Whirlwind I - A simple AoE knockback with bonus damage. We do not put more points into this because there are better things to pick. Could be substituted with Charge I, but I personally prefer this.

Flurry III - 75% Attack Speed increase which not only boosts your effective DPS, but also, in practice, boosts the chance of critical hits (the more attacks you land the bigger the chance you'll crit). While the last upgrade gives you less return for a bigger cost investment, it still provides good DPS and thus we max it.

Resilience II - 3SP into this will give you 9 armour for 8 seconds, a decent defence steroid. The remaining 3SP for Resilience III isn't worth it as you can rather invest them into Battle Rage II for even better bonuses.

Battle Rage II - Insanely strong damage and defence steroid, which has the same buff timer as Resilience and hence is easily managed. Also it makes you completely immune to Crowd Control effects for 8 seconds, allowing you to neglect investing into Sprit. The 5 second debuff at the end of this is neglectable.

Two Handed Expert III - A no-brainer. It flat out increases your two-handed damage and gives you a strong 10% stun chance. Worth every point.

Fury III - As I use Hirge as a companion, I don't always reach the 35% HP required to activate this passive. However, sometimes things don't go as planned. Sometimes Hirge just dies or decides that she doesn't want to heal you. When that happens, and it does happen, this passive is invaluable with it's strong 65% damage increase that could turn an impending death around into a glorious 250 crit. Take it.

Cleave II - An ability that makes the warrior a beast in slaughtering AoE mobs. I eventually plan to upgrade this to level III, but honestly, at level II you're already hitting 3 mobs in total and unless you're a goddamn demigod you shouldn't be fighting more than 3 creatures at the same time anyway. Leave this at II for now.

Duel II - A decent +6 damage increase for 3SP. The downside is you have to charge it, but that takes only 3 attacks which you'll definitely manage to land in a boss fight rather fast, especially with flurry up. Worth until level II, but not higher really.

Precision Strikes II - 3SP to double your critical chance. If you're using Greatswords, that's from 4% to 8%. If you're using Greataxes, that's 5% to 10%. Definitely worth it, but level III is not as you pay the same amount of points for only half the benefit you already get, making your Greatswords 10% and Greataxes 12%. Keep it at level II, you got better stuff to grab.

Massive Criticals III - I was debating on keeping this at level II, but level III offers a rather big chance to insta-kill scrub creatures and it does, at the end of the day, raise your max hit. Max hits are dank. Grab level III, it's gucci.

Heavyhand II - 3SP for a flat 3 Attack Damage increase. It's not bad, but not something super special either. Level three gives you 2 extra damage for 3 more Skill Points which isn't all too bad but your points are better spent elsewhere. Keep this at II for now.

Death Ward I - A decent passive that gives you cheap resistances towards Death, costing only 1SP per rank. I'm leveling this to level III if/when I reach level 26, but for now, this stays at level I.

Body Development III - This is the crème de la crème of the most recent (so far tester) update. For 6SP it made my HP jump from 500 to 750, not to mention that this has extremely good synergy with both Battle Rage and Fury. Battle Rage raises your strength which allows this passive to raise your HP even more (pushing me to 829), and the more HP you have the less risky is it to activate Fury, as it works off of a percentage (with Battle Rage active, I can activate Fury at 290HP!). Max this out, it is worth every single point.

Head: Heroic Helm (best helm I've found so far).
Chest: The Undermother's Hide (Myrosian chestplate also works).
Gauntlets: Myrosian Gauntlets (Best gloves I've found so far, since Gauntlets of Might are unnecessary when you have the Warrior's Girdle).
Necklace: Ursan Charm (It has armour!)
Ring 1: The Abbot's Ring (Trait boosts + armour!).
Ring 2: Ring of Unlife (Trait boosts + high death resistance!).
Cloak: Vorator Hide Mantle (Primeval Mantle also works, but this has more HP).
Legs: Platemail Leggins (will replace with Legion when I find them).
Boots: Ironfoot Boots (worse than Legion in terms of armour, but a passive that prevents knockbacks makes up for it since you can't always have Battle Rage active.)
Belt: Girdle of the Warrior (for that glorious +2 STR).

Weapon(s): I use Greataxe of Falling Stars as my primary weapon (RNG has not favoured me with the Soul Cleaver), and switch to Permafrost Greataxe versus undead and fire-creatures. I also use Permafrost Greataxe versus bosses, due to the chance to paralyse. Lastly, I have the Rancor as my fire weapon of choice versus ice creatures and trolls. Fuck trolls.
Shield: Infernal Aegis. It is completely unnecessary though, since as a two-handed warrior you will literally never benefit from its stats. I equipped it simply because I could. 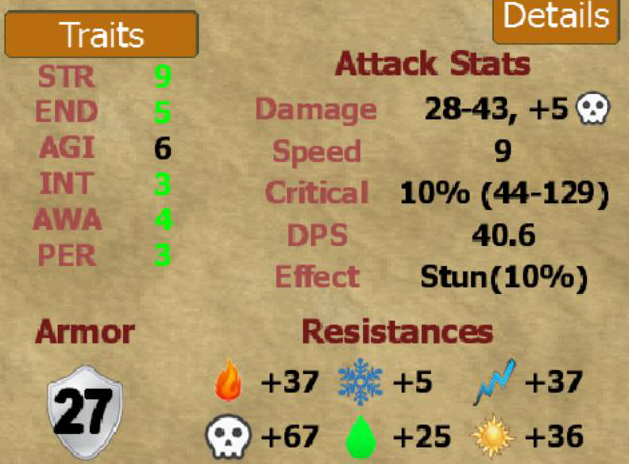 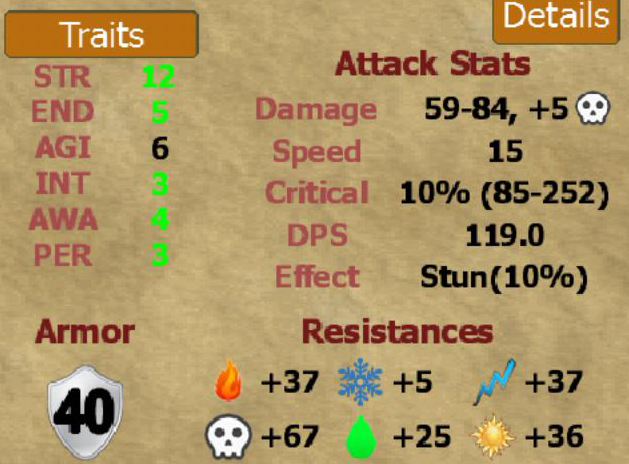 I like the overall balance to this build. There's a lot of benefit in having more Advanced Skills rather than a few maxed out skills.
V

I also like Gloves of the Explorer as good to equipment for the detection bonus. But with 700 hit points, you can afford to step on a trap or two.
V

Also it's worth noting that if characters are limited to 8 total Advanced Skills, not getting Spirit Resistance helps free up a spot. So while there is some benefit of having both Battle Rage and Spirit Resistance, it might be better, as you point out, to opt not getting it.

And since i have high shielding i don't need battle rage or / and fury.

Or create the option the erase by skill so you can select with skill to erase now its all gone.... and not just 1 if you want to replace it......
D

A build I'd be proud of tooo.
C

And since i have high shielding i don't need battle rage or / and fury.

Or create the option the erase by skill so you can select with skill to erase now its all gone.... and not just 1 if you want to replace it......
Click to expand...

Well my build is a two-hander build, so Infantry Training is out of the question for me. If you have that you basically have full cc immunity yeah. I'd say fury is still useful, especially if your hp is 800+. You get a 65% damage increase just by staying at 300hp, chugging pots whenever you go below 120hp. Hell, the higher the armour the less risky the skill too, so definitely consider fury.

Hmmm i don't have advanced skill room left...... this is crap.
W

He only needs Int 1, Awa 1, Per 2 for Precision Crit and Duel

I see 3 Awa gets you an extra armour point though.

Also, how with Hirge as sidekick , how would he find secrets and do you just ignore traps and hope she heals you?

Sorry assuming he's not active on forum, answer would be great though or from anyone !

New player here sorry ! I'm looking for a good warrior build (1H or 2H makes no diff to me) but I rarely use potions and scrolls so will suffer without Hirge or Adaon I guess , not sure which
You must log in or register to reply here.
Share:
Facebook Twitter Reddit Pinterest Tumblr WhatsApp Email Link