Is there a limit to the number of ruined dragoon boots you can find?

If I remember correctly there is no limit, wiki says same. 2 chests have a possibility to drop them. Just try more often till you get them 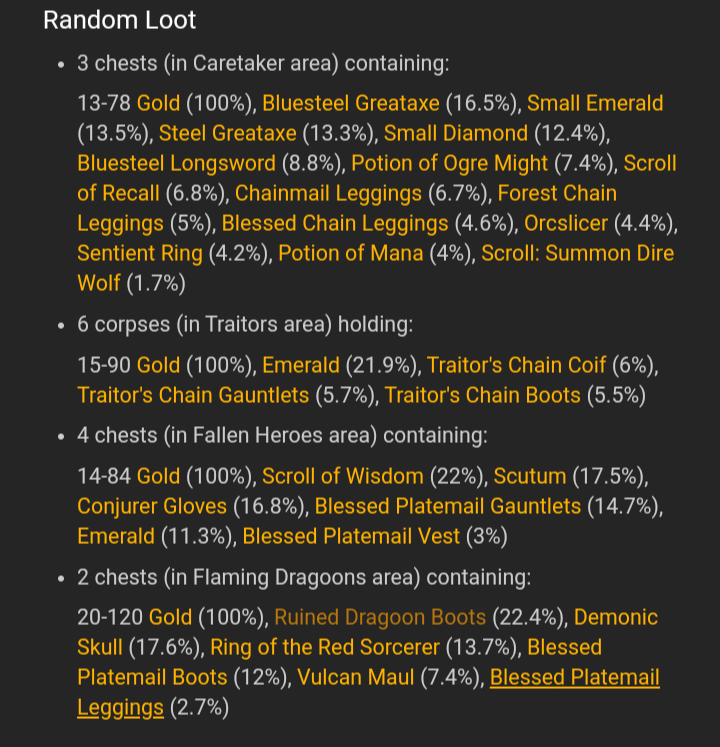 You're not saving/reloading to do a run are you? You need to refresh the dungeon via Sleep or Time before each run.

But yes the LORDS OF CHAOS can give you enough boots to equip an army... or none at all.

p4ran0id -- Thank you for posting the complete loot index. The version that I looked at didn't list either of the blessed items​

stonedwolf -- Thank you for the tip. I'm using Kingsbridge as a base and utilizing 12 rests between runs.​

p4ran0id said:
If I remember correctly there is no limit, wiki says same. 2 chests have a possibility to drop them. Just try more often till you get them

Thanks to this thread I was able to verify that there is no limit on the number of dragoon boot drops. Then it was just a matter of persistence until I hit the number I wanted.

My best experience was in arc. With archer it took me 3 days to get the gloves. With mage I got 3 in a row, every chest I opened had one

On average, yes you will. Not quite with these exact percentages, see below, but yes. So do a thousand games and on average it'll work out. A sample size of 1 or 2 or even 10 games is insufficient. You need hundreds more runs at least before you can start to be confident in acquiring on the stated probabilistic drop curve.

PS here is more info about how the probabilities work.