User guide, walktrough, instructions how to do something...

Many new players are wondering: how should I develop my favourite companion Grissenda?
This leads them to forum, where they direct this question to experienced players.
No need to look further, the guide is here! This will be of course my subjective opinion based on my experience, so if someone has another idea for a fun build, then by all means: please share!
I also recommend giving all available skill tomes to your favourite companion, since this immensely helps in achieving a build without any compromises!

Goals of these builds: maximising effectiveness, minimising weaknesses, low investments & high returns - getting all useful skills to level 1, then upgrading to level 2, in most cases we forget about level 3

I. 1handed Grissenda - this build uses ordinary hand weapons. Light weapons are useable on low to mid levels, but not effective on high levels. Why? Because you'd have to give up on Infantry Training (very powerful skill), and either Heavy-handed, Bodybuilding, or high agility stat that is essential for the effective employment of light weapons. If you stick to necessary investments, you won't have to retrain your companion.

Low level:
- Traits: INT 1(it's cheap, and boosts XP gains), then invest in strength and endurance only.

- Skills:
Fury 2 or 3 - gives major damage boost, gets activated frequently, and in case of your companion it's rather safe to use,
Cleave 2 - helps in crowded fights,
Shield Expert 3 - needed later, boosts toughness,
Resilience 2 - optional but useful, boosts toughness without extensive potion spamming, you might give up on it to save skill points,
Two Handed Expert 0 - it's not used in this build,
Bash & Whirlwind 0 - I advise against these skills, unless you like to have your targets knocked around by your companion,
After you get the skills that you deem necessary, save all the skill points for later.

High level:
Once you complete Grissendas quest that grants her advanced skills, you'll have much more options to improve her battle prowess:
- Traits: raise Grissendas PER 3, AWA 1, STR 3, END 4, STR 4

- Skills:
Infantry Training 2 - probably the best skill for improving toughness. Stun immunity, and 50% critical hit resistance are really helpful. Halved paralysis duration helps too, but doesn't neutralise this threat,
Precision Strikes 2 & Massive Criticals 2 or 3 - these require big investment, but synergise well, and combined with Cleave allow Grissenda to mow down monsters quite effectively. If you don't like the random factor involved, leave the investment in these skills for later,
Bodybuilding 2 - offers big HP boost, which is always helpful, but requires END 4, so you'll probably get it late,
Heavy-handed 2 - offers stable damage boost, but requires STR 4, so you'll probably get it late,

I. 2handed Grissenda - this build requires resetting your companion, unless you want 2 skill points, and 2 trait points locked in areas that are hardly beneficial to her. Using 2 handed weapons means Grissenda will be less tough, but more deadly, and able to stun your opponents pretty frequently.

Low level:
- Traits: PER, AGI, and AWA to 0, INT to 1, STR and END as high as possible/desired. STR is more important stat here

- Skills:
Two Handed Expert 3 - your most important skill that gives you stable damage boost, and stun chance very early in the game,
Fury 2 or 3 - gives you a good damage boost, and stacks very well with Two Handed Expert,
Cleave 2 - damage and stun for everyone!
Shield Expert 0 - this skill is of no use here
Resilience 0 - without shield this skill is weaker. If you really need this effect, consider using potions instead,
Bash & Whirlwind 0 - the same situation as with 1h build, but Whirlwind might work better with 2h. If you care enough to try it, then go ahead. Personally I'm not interested,

- Skills:
Infantry Training 0 - forget about it
Heavy-handed 2 - should be available pretty early compared to 1h build,
Bodybuilding 2 - as above,
Precision Strikes 2 & Massive Criticals 2 or 3 - these are still worth getting, but are less effective here, because 2h weapons have lower crit chance, and are slower, which means massive criticals happen less often.

This guide is great for where my current character is with Griss's development. I had previously reloaded a save outside Castle Storme after not being prepared enough for what was inside and switched out Griss for Hirge to be able to grind a few more levels and pieces of equipment before coming back to it again.
I'd also struggled with the
ambush outside the mine
catching me unprepared with little to no healing capabilities after I'd used all my recovers, which is what'd sent me back to using Hirge over Griss until now for a good half a dozen levels, including the one that saw me go back and win that fight so I could
snatch the medallion from it too
.

Having just nipped into the Grey Library and making my first bulk purchase of potions, I only bought a stack of MP ones to fuel Hirge's heals, so I need to go and stock up on healing potions before going in to Castle Storme again but I have my stats not far off where you advise allocating them, so all I might ask is if there might be any particular equipment/weapon types and/or attributes you might recommend Griss have for that particular scenario or even just in general?
I was thinking Holy/Fire to attack and Death/Poison defence from my last observation in there but a quick foray to find out made me realise how reliant I'd been on heals for the times I'd get mobbed, as opposed to smaller enemy groups that couldn't get near me for long or archers I could pick off at distance when close quarters wasn't an option.

I recently picked up Hammer of the White Priest which I was going to try her with but if she would be better with the Magma Shortsword, I could give her that since the hammer is usable by my rogue too. Sonnet and Icicle give her better DPS but they all give similar criticals (as does Crushing Ember but that has the lowest DPS of all the weapons I have handy for her) but I know fire is strong against several of the enemies in there and Death would likely heal some..
I'm sure I had a Myrosian Breastplate for her but have died lots lately and lost a frustrating amount of uncommons that made me go "Ooh, Griss'd like that!" since they were Warrior-specific but worth the inventory slot for her to have later.

Thanks again for the guide though, it's really comprehensive and answers a lot of questions I'll have in my upcoming progress, together with many I already had.

Here's my pre-respec Griss for reference - 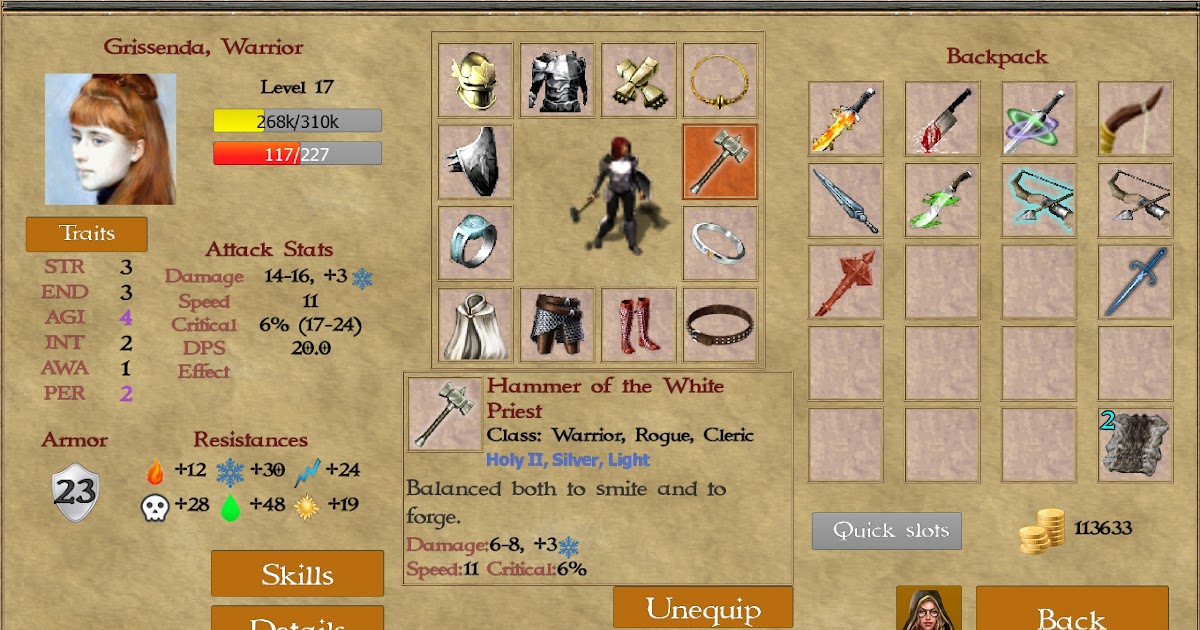 
https://drive.google.com/file/d/1ytnBH85Wke4ADahOc5pwy_kM15RGgmnz/view?usp=drivesdk
(I just added the Resilience, after deliberating on it until I read your advice).
Last edited: 26/10/2022

Weapons with holy attribute are pretty useful in the Castle Storme indeed! Paladins Longsword or Justice would be the best. Your Hammer of the White Priest is good, if you did Hirges quest, then Spirit Breaker is good, even Ghostbane will do if you're in a rush. As for resistances: you're right about death and poison resistances being useful, Nivarian Cloaks, Blessed Necklaces and others will serve you well. There's a single powerful enemy that uses poison, so you might consider getting two potions of greater poison resistance. You'll use those up, and free up a slot . Another useful item would be Scrolls of Turn Undead. Very helpful if you get overrun by undead, or face someone you can't beat, and have to run

I didn't do Hirge's quest all the way through yet and only part of the Abbey, so I think the first weapon I have on that list is Ghostbane but it was stored away in the Town Hall vault, so thanks for the tip to grab it; same for the potions and scrolls too, I've been storing most of what I've found in the early game, thinking many of them will be more useful in mid to late game than earlier on (a potion of Greater Death Ward just let me go back for Stiletto, for instance).

I'll be taking all precautions I can to avoid running if I can help it because my joystick control often sees me hung up on obstacles but there's a single invisibility potion in my vault that could free up a slot there, unless the enemy has the Detector tag.. then I'm stuffed again, as usual!

I played Griss as an agility tank until I got my Iron Golem, then I respeced her to 2-handed str.

Gris does well as an agility tank in the early game due to early game equipment, and every bit of defense really helps. 1-H and 2-H weapons still do okay (and better against high defense enemies).