Back to the NEW CLASS COMPENDIUM​
TOLASSIAN HIGH PRIEST OF TOL​ 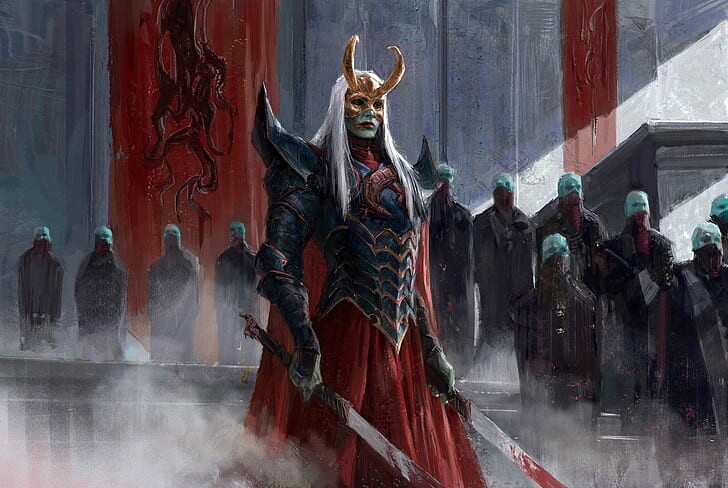 GOAL: Build a Church of Tol in Nivarian, to house your Library and Reliquary. Perform the Chosen One Ritual to become Tol's High Priest and wear his Broken Crown. With Tol's power, hunt down the Fifth Sleeper to perform the Ascension Ritual, and become the new God of Death!!!

PRIEST OF TOL CLASS:
- Play a Cleric.
- Be as evil as possible. Only do good to advance your divine goals. Remember: Good acts can serve the Greater Evil.
- The only authorised armor is the TOLASSIAN ARMOR. All other armors are forbidden (Head, Hands, Body, Legs and Feet).
- The only authorised elemental weapons are DEATH, TOXIC and SPIRIT. Weapons of other elements are forbidden (Fire, Cold and Lightning). Normal weapons are allowed. ​
MUSIC: Noosphere (Extended) - Warhammer 40k Mechanicus OST


STORY: Centuries ago, your people came to Varannar from Andoria to escape persecution by the new Church of The Eleven, as the first Godswar ravaged the Empire. They founded a majestic city, hidden underground for peace and safety, which was ever known only as "The City of the Ancients". Obsessed with death, your people built grand underground tombs throughout Varannar to bury their dead. Your culture believes life is just a temporary journey, and death is eternal. Each life is spent preparing its own death, building its own tomb in which to reside for eternity in death. You are Tolassian.

During the construction of a tomb, your great-grandfather discovered a strange glowing ore under Mount Orogg. The Numina Stones. 5 stones were retrieved, and given to 5 Tolassian Elders. The Numina Stones contained unlimited, raw magic, and as such threatened the entire world. To contain their power, the 5 Elders fused with the Stones and went to sleep forever in The Temple of the Sleepers.

One day, your brother Tol left The City with his friends Arbenos, Nivaria and Thelume. They wanted to see The Sleepers for themselves, to know if the legends were true. They never came back...

Months later, you heard your brother Tol's voice in your mind. Everyone in The City heard it. Tol said: "From now on, may Life be eternal in Death!" Tol had done it, you knew. He had found The Sleepers, took one of their Numina Stone and fused with its power. But he didn't go to sleep. He was awake! A true god was born!

Alas, even a god like Tol could not withstand betrayal. When his friends, The Three Traitors Arbenos, Nivaria and Thelume, also took Numina Stones and became gods, they betrayed Tolassia, they betrayed Tol. They defeated him, shattered his Black Mirror into countless shards and broke his Crown, and Tol was forever mangled...

Centuries have passed. You died a long time ago, yet you are alive in death eternally, thanks to your brother Tol's Blessing. But new life has infested Varannar a century ago, refugees from Andoria's destruction. They breed like vermin and toss their dead into the gutter. The "Warm Ones" have no respect for life nor death. You tried to offer them Tol's Blessing, but The Three Traitors protect them from Tol's waning power...

This morning, there was a miracle from Tol! One of those despicably long-lived Muud'ari alien was found traveling in the forest near your buried City of the Ancients. A young one, looking for some inheritance. Muud'ari were too powerful to be messed with, every Tolassian knew that. But that one was... an idiot, defenseless youngling! Finally, you thought, a warm vessel worthy of Tol!

You ordered your Tolassian servants to capture the Muud and bring it back to The City. There you performed the sacred Rebirth Ritual, and took over its body. Your old bones crumbled to dust as your soul entered the Muud'ari's marvelous body, now yours forever. This alien species was even stronger than you imagined!

Your master plan is now in motion.

A new God of Death shall be born. You will establish a Church of Tol in Nivarian, perform the Chosen One Ritual and become Tol's High Priest. With Tol's power coursing through your warm Muud'ari veins, find the Fifth Sleeper and perform the Ascension Ritual: Kill them, absorb their Numima Stone into your body, and ascend to divinity! Become the new God of Death!!!

BUILD A CHURCH OF TOL:
To build a Church of Tol, find and purchase a worthy building in Nivarian.
- LIBRARY: Fill one of its coffers with books: Ancient Tolassian Tomes, books of necromancy and other ancient tomes of great historical value.
- RELIQUARY: Fill the other coffer with relics: Black Shards from the Eye of Tol, Purple Medallions, skulls, and human remains.
Your church won't be finished until its Library is full of books and its Reliquary is full of relics worthy of Tol.

*It is strictly forbidden to read ANCIENT TOLASSIAN TOMES. You must showcase them in your Church of Tol's Library. Only as you perform the Chosen One Ritual will you be allowed to read the tomes.


CHOSEN ONE RITUAL:
To become High Priest of Tol and harness his power, you must perform the Chosen One Ritual. To be worthy, you must:
- Own a completed Church of Tol, its Library full of books and Reliquary full of relics.
- Wear a full set of Tolassian Armor.
- Have a permanent Death Resist score of 179+.
- Have the Broken Crown of Tol in your possession, but never have worn it on your unworthy head.

Once you're ready, perform the ritual in your holy Church of Tol: read all Tolassian Tomes you have collected in your Library, then put the Broken Crown of Tol on your head for the first time. If your life isn't drained by the Crown, you have been deemed worthy. Congratulations, you are now the TOLASSIAN HIGH PRIEST OF TOL! (From now on, you must wear the Crown forever. But you can burn down your church now, you don't need it anymore.)


ASCENSION RITUAL:
Find the TEMPLE OF THE SLEEPERS, and open the sarcophagus of the FIFTH SLEEPER. To perform the Ascension Ritual, simply plunge a blade in the Fifth Sleeper's heart: the power of the last Numina Stone will flow from the Sleeper into your own body, and transform you into a NEW GOD OF DEATH!

So my companions are like.. Follower of Tol? Because its hard without companions so I will convince them to join my cult (except Hirge who is a princess in nivaria).
Last edited by a moderator: 29/07/2021

Varsil said:
So my companions are like.. Follower of Tol? Because its hard without companions so I will convince them to join my cult (except Hirge who is a princess in nivaria).
Click to expand...

There's no restriction on companions.

I'm playing the challenge with Hirge. As a descendant of Nivaria herself, Hirge has powerful clerical abilities, and was deemed worthy by our Church. I plan on offering her as a sacrifice to Tol before I become a god myself.

I just need to find a way to kill her... For some reason she keeps raising from the dead, and when I try to lock her up somewhere she just teleports right back at my side. She's so powerful it scares me.

Apocalypse said:
I'm playing the challenge with Hirge. As a descendant of Nivaria herself, Hirge has powerful clerical abilities, and was deemed worthy by our Church. I plan on offering her as a sacrifice to Tol before I become a god myself.
Click to expand...

Can you post a screenshot of your progress?
I'm struggling on getting tolassian armor.
One more thing (!) Is it okay to enter the Tower and make the Bag of Holding?
Last edited: 29/07/2021

Varsil said:
Can you post a screenshot of your progress?
I'm struggling on getting tolassian armor.
One more thing (!) Is it okay to enter the Tower and make the Bag of Holding?
Click to expand...

Sure you can get the bag of holding, no problem!

Tolassian armor parts are super hard to find. My favorite ruin to dig for them if Syllara's tomb, from The Lady of the Night quest (in Thuram, near Deepfrost). Tolassian Champions (Lvl 11 skeletons) are the friends you want to talk to for that!

As you can see, I'm wearing the Crown, so I already did the Chosen One Ritual and became High Priest! But before that, I was very proud of my Church's Library! One coffer was full of Ancient Tolassian Tomes, of the 4 Books of Necromancy, the Opalan Frontier, and a bunch of nice books I got from Townhall Quests (yes, I stole and kept those books lol).

For those wondering about Death resistance 178 I linked the relevant sections in the Broken Crown of Tol's notes.
And for those avoiding 2-handed weapons:
Plus of course

Unfortunately one cannot have the Bishop Ring and the Broken Crown at the same time.

PERSONAL NOTE : for a Cleric I would would swap in Sandals of the Saint (for a +9 net gain). That's strictly prohibited here though I personally like the idea of sandals and chain mail because there is an AMAZING old Crimea / Boer War statue near me of crusader wearing sandals and he is boss as anything. I'll get a photo later. So for a personal RPG play I WOULD okay with that swap, but I WOULDN'T swap the chain shirt for Anointed Cuirass for an extra +15, that's just "cheap play" and cheezy looking.

UPDATE: as said below, I neglected to calculate Personality.
Last edited: 30/07/2021

The Personality give 5 death resist per level.

Sacrificing Humans for Lord Tol
(Yeah I know it sucks)
Click to expand...

"As you sacrifice another Warm One to the Glory of Tol on your Church's blessed altar, you hear your god's terrible voice echoing within your mind:
- My beloved servant, Adaon's Best Waifu (Tol's voice chokes on your horrible name, gasping for air while muffling an uncontrollable laughter from beyond the grave). Your offerings please me. But tell me, my favorite Tolassian priestess, how did you manage all those beautiful human sacrifices in my name? How?"
Share:
Facebook Twitter Reddit Pinterest Tumblr WhatsApp Email Share Link