Hey can someone tell me whats the best build for rogues? Skill and traits are only needed. Same with Cleric.
E 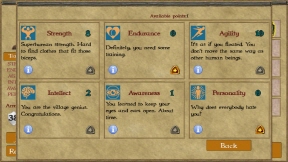 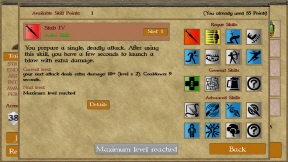 - stats
Priority : (skill requirements) > AGI > STR > other stats
At first, point AGI : STR = 2 : 1, but STR point should be even. If you play iron man, then END is also important. Next to AGI STR, I prefer to pointing INT because of xp

I don't recommend poison mastery, because its effect is so small, and even high level enemies have high resistance for poison.

(I don't recommend the three, because its damage is so suffocating...) 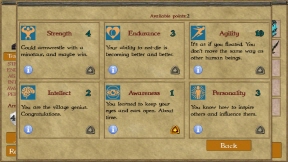 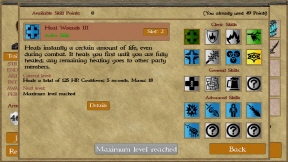 Cleric's skills are almost good. This priority is my style. Especially, sacred fire is good skill, but it spends so much mana, so I don't like it.
V

First, my standard disclaimer that "best" is a subjective term. If you're having fun and can make it though the game, than awesome.

For Clerics, Duel pairs well with a healing method (either the Immortal Build or using the healing skill). That gives a lot of durability with decent damage. Gives the the highest dungeon penetration of any class, which in turn gives the highest XP and gold gain. Plus, since a cleric can self-heal, you save tons on healing potions. Those cheap mage tower potions become your friend.

The Immortal Build is used to describe a Cleric build around the Intervention Skill. Even if you don't go full Immortal Build, having Level 1 Intervention can help provide a safety net for unexpected traps or unlucky stun situations.

Sacred Fire is rather useful. It can kill most early enemies in one hit, making it good for crowd control. It also allows for a good opening hit for strong enemies, or a finishing blow on trolls. Lastly, Sacred Fire can be used for hit-run tactics for a few bosses. I think the lowest level challenge on beating the crazy spider area used Sacred Fire for hit and run.

Duel pairs a little better with faster weapons because it adds damage per hit, given faster weapons such as 1-H maces a slightly higher DPS boost, but all-and-all, both 1-H and 2-H Clerics benefit from Duel.
V

Update: Sacred Fire bumped from the rotation due to user interface issues.

Started my first play through on the PC, rather than my tablet. Due to the key layout, I'm finding it awkward to use more than a few active skills. Thus Sacred Fire has fallen to the way side. I got the skill but simply wasn't using it as the keyboard was awkward/new.

I have mixed feelings about Bloodlust. You're most likely going to use the skill in group fights, when it matters the most. But for most enemies, the skill times out too soon. It also only triggers when you make the killing blow so if your companion gets the last hit, the skill doesn't trigger.

Best guide for a cleric is that one

You can modify that, but this guide is really awesome as basic strategy for a cleric joining the three
S

I am doing a main cleric in hard right now paired with Adaon. Level 19. I am playing with him right now to see what is the best build for Iron man. A limitation you will need to keep in mind is lack of aoe damage. Also our aoe is fire based, so enemies that have high resistance to fire or even heal with fire damage are going to be difficult for a cleric to deal with. To compensate for this you will want to keep fire resistance gear around. If you choose not to deal aoe damage, you want to be tanky enough to not die from hordes of enemies, high enough armor and resists will generally do the trick. If you equip a shield it doubles the effectiveness of your armor, paired with holy shield and battle prayer you have the potential for the highest effective armor in the game. However, you will need your companion to do the damage seeing as how you don't do as much. The heal allows you to overheal yourself and have it apply to your companion, which late game can be useful, early game however probably not worth it as your companion respawns on his own when no enemies are nearbye.

If you decide to go tanky I dont see much point in investing in intervention. Maxing life and mana I have also found to not be as valuable. You want to max armor and resists as a priority, as you can sustain your mana with cheap flasks sold by the alchemist from the three. I also wouldn't bother investing in quick recovery for this same reason. However you do need a base 5 personality for Battle Prayer which you do need, other than that you don't need any more mana. Your main priority after 5 personality should be agility so you can get your armor as high as possible. Once you get 40 or so armor with buffs your damage received will be trivial enough for higher end content. Armor acts as flat DR so you can essentially walk through pacts of lighter enemies. Just make sure you have the right resists for the area. Get lots of bank slots. I'm doing this right now and am duoing with Adaon for his trap skills. Very useful for undead heavy places which you will want to stick to until you are high enough for other stuff. Heavy hitting boss type enemies usually will knock you back and kill your companion rather than overwhelming you with damage, because of this Spirit Resistance also important here to prevent knockbacks, stuns, paralyze. Don't buy the Blessed chain and blessed plate you want to prioritize armor and resists not mana and health. Find undead stuff to do for grinding. Give Adaon a bow so he doesn't die as much. So to Summarize for this template max Heal Wounds, Barrier, and holy shield first (with utility as needed), later you will max out Battle Prayer. Then worry about damage and more utility.

If you decide to make a Paladin that does damage instead of tanking everything, I would recommend you max intervention, max Sacred Fire and all damage abilities like arbenos's might or warrior passives. Get a 2 hander, and prioritize Strength, and Personality. Make sure you have fire resist set like a mentioned earlier, as you will be weak towards fire based mobs. Quick recovery will be more numerically useful for this build. The blessed plate and chain is good here if you are mid game and looking for gear to buy. Don't worry as much about armor, try to get as much life and mana as you can for intervention. Try to find Frost based enemies and undead if you can and do fire stuff later.
You must log in or register to reply here.
Share:
Facebook Twitter Reddit Pinterest Tumblr WhatsApp Email Link