Arcanmaster said:
@p4ran0id Maybe classes are on Assign Skills page then, or there are no classes.
Click to expand...

There will be no classes in the classical sense. This concept is replaced by careers, which provides much more flexibility for character development.
F

Can character career be promoted like squire becoming a knight etc

From the screen shots provided, there looks like there will be some vertical career advancement, that or some careers have trait / skill prerequisites that you can't get right off the bat?

The game appears to be be heading into a totally different direction than EK. That could be a great thing for the new game, but it won't be EK 2. That's a point Developer David has been transparent about from the start.

I'd like to see EK 2 type of game that uses the same mechanics and world... Maybe the Invisible Swamp Donkey can kickstart that ... 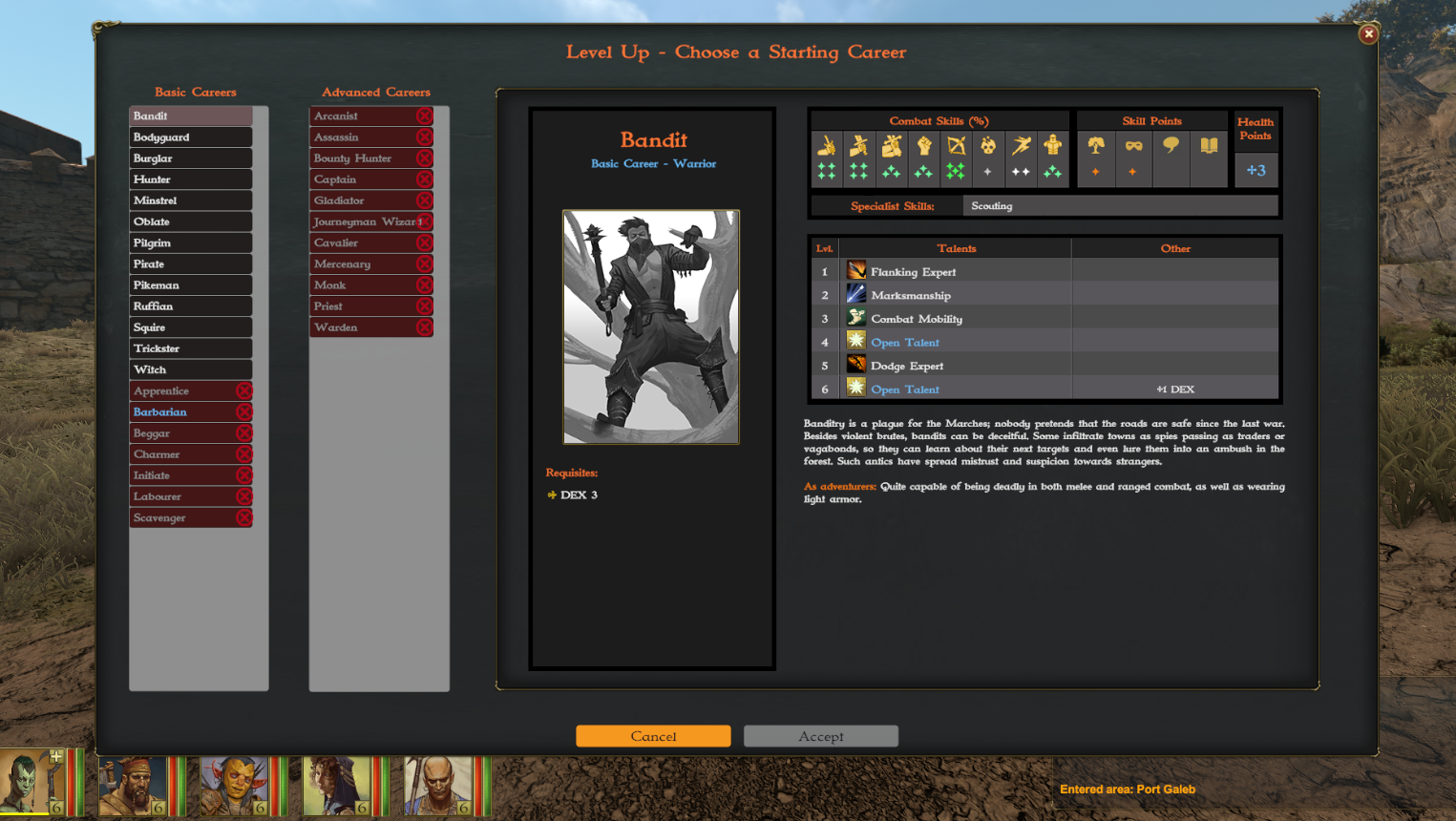 It may vary at release, and probably in Early Access there will be little options to Advanced Careers due to level limits, but this shows a provisional list.

The ones in red are also in the game, but the character doesn't meet the requisites.

Looks like this game will pack a lot of replay value just for builds alone. Will there be a "custom career" option or does that break the vision? Not sure if that's been asked already. Just wondering. Looks like there's plenty of careers already, so wouldn't be surprised if it was a 'no'.

As you'll probably know, development of Exiled Kingdoms is officially complete with version 1.2 and even if development continues in the years to come, right now my focus is on my next game: Archaelund.

First of all, Archaelund is not a sequel to Exiled Kingdoms, but a completely standalone game set in the EK world. It's a far bigger, more complex and ambitious game. I won't be holding anything back here, since the success of Exiled Kingdoms gives me the freedom to develop this game without making any compromises. Or that's the plan, at least

Archaelund will be a game targeted at the PC platform, which will try to bring back the old flavor of the Golden Era of RPGs, pretty much like I tried to do with EK on mobile. A mobile release is possible, and it might be released on some popular consoles as well. However my priority is to make it a perfect PC game, and I won't limit functionality, design or scope because of other platforms; at this point the only thing I can confirm 100% is the PC release, although I am aware of the EK mobile fanbase and will do my best to have a mobile release as well.

You'll control a full party of adventurers, and explore the broken lands of the vast continent of Andoria, home of the fallen Empire. The Exiled Kingdoms are claiming the shores of their mythical Homeland, but they'll find the region is not as deserted as they expected... prepare yourself to be inmersed in dozens of small plots and quests over a large world map once again, and to face a main plot of epic proportions (no, really!).

The game will feature a very unique combination of real-time exploration and careful turn-based strategy during encounters; you'll explore the world in first-person perspective in a 3D world, much like in the Elder Scrolls games or in the classic Wizardry or Might&Magic games. But battles will happen in isometric perspective! When combat begins the camera floats up to offer a top-down view of the scene, so you can individually move your party members. The idea is to have the best of both worlds: an immersive exploration and tactical combat at the same time, allowing huge epic battles. As far as I know, no modern RPG has done this before; classical games like Pool of Radiance or Betrayal at Krondor did, but in a very limited way and using much simpler graphics.

I'm developing a full-fledged rule system called Geryon for this game, with dozens of classes, skills and a huge list of spells and abilities. Still I'm carefully designing the progression to make it intuitive and quick to understand. The combinations of races, classes and builds will be immense, so it's impossible to have everything on your party in a single playthrough.

Content will be, as you probably imagine, an important part of the game. Expect the same open-world design, and the same weird combination of seriousness and silly humor and themes you "enjoyed" in EK; yeah, I am afraid the terrible jokes stay, and might get even worse. I already have a large list of ideas for side-quests, and a very interesting plot in mind for the main quest as well; when all is said and done I'll try to have a game that spans over 100h for the "completionist" player.
Click to expand...

Beautiful game looks great! But giving a humble feedback: I, personally , do not enjoy this combat sistem. Turn based combat really snuffs out the fun for me. It breaks the dinanimns (?), the role play aspect of the game.

Not even Jesus pleased everybody - so don't be upset.

Your work is amazing, and I wish you every success! Congrats!
T

So where does this game currently stand? Looks great to me!

As always with program development: the first 90% is done, the final 90% hasn't begun.

Disclaimer: those are my estimates and in no way reflect reality.

Theben said:
So where does this game currently stand? Looks great to me!
Click to expand...

Early Access, which should be bigger than what other people call a "full game", will be out in 2022. I expect it happens in the first half of the year, but I will not know until it goes through testing, and we're not even ready for testing yet.

Check out this short video/montage of our composer (Laura) working on the Soundtrack: