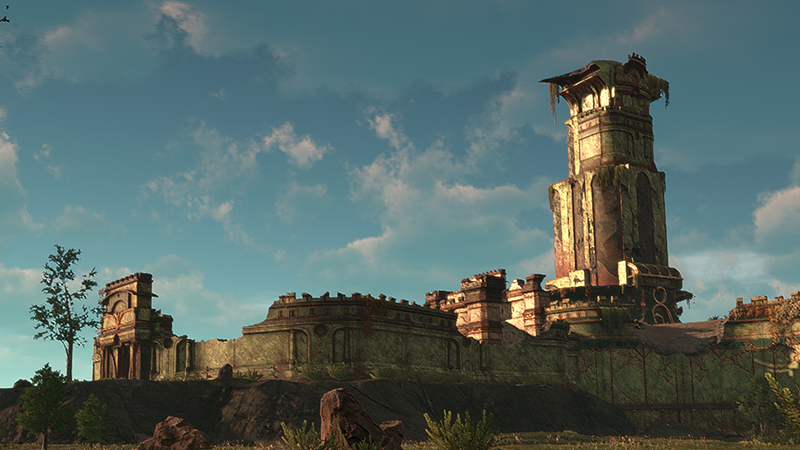 In this update we share with you the progress of development as well as more details about the scope of Early Access.

More areas are being created steadily, and details added to existing ones. The concepts drawn by Ignacio Corva based on my Lore are then made into scenery by our lead Environment Artist, Alberto Trujillo. Below you can see some examples of the early game areas (click to enlarge). 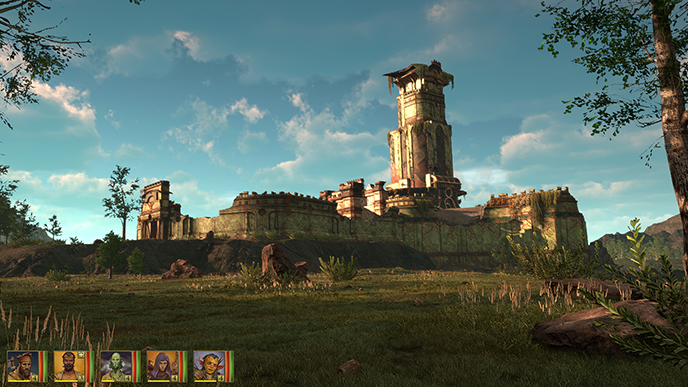 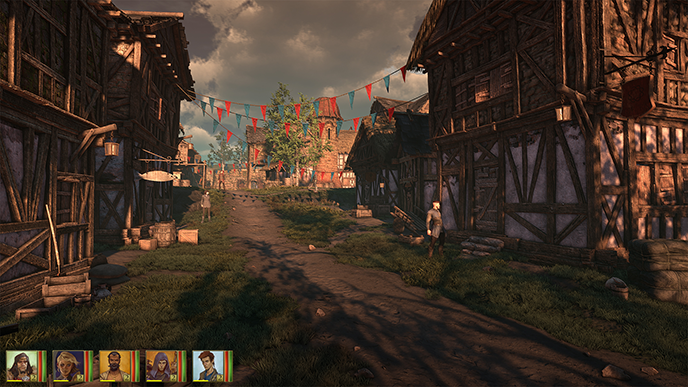 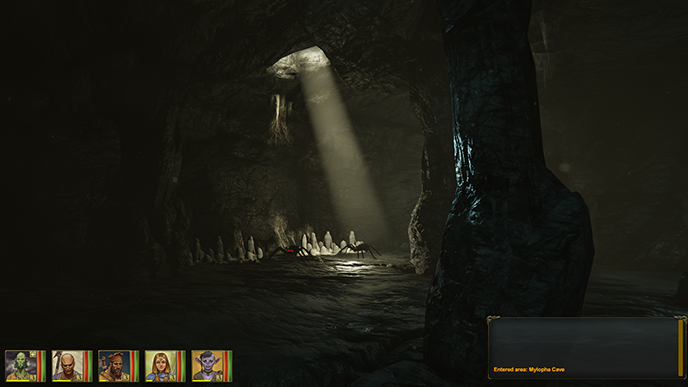 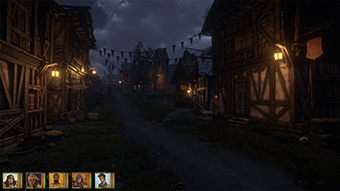 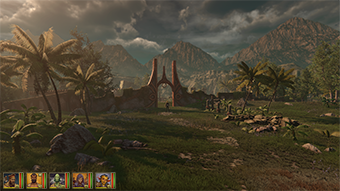 Corva's drawings also cover the many denizens of Archaelund, which are later turned into 3D characters by our "Master of Creatures", Bob Metcalfe (SecretAnorak). Below you can see side-to-side concepts and development screenshots of the Goblin playable race and a small critter called Norrax.

In regards to Music, Laura Ballestrino is composing and producing an amazing original soundtrack for the game, with specific music for each of the many areas of Archaelund. It is the final "magic touch" that breathes life into the world, and we'll be sharing some of it soon.


The Lay of the Land

Archaelund is divided in square map sectors, each of them large enough to get lost in. Sectors include dungeons, secrets and encounters with a variety of peoples and creatures, especially those including a town or village (and in the Early Access release, most will). 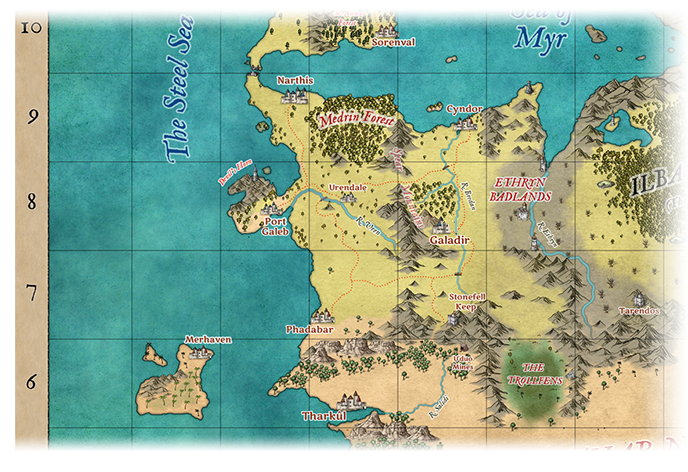 Archaelund is a non-linear game, so locations are not set "in order"; they can be visited or explored at your convenience... if you can handle the challenges in them, of course. There will be a "logic" on what kind of encounters you face in each location, but the difficulty will not scale to your level and surprises may happen. Explore carefully!

The Early Access release will contain several map sectors including at least four towns, many dungeons, and dozens of different quests. These initial sectors are part of the Southern March, the most "civilized" region of Archaelund where your adventure will begin. Future planned updates will cover many more sectors, further to the North, East and South.


All Fun and Games

Archaelund is very focused in its gameplay mechanics, and in particular we've been working extensively on Character Development and Combat. 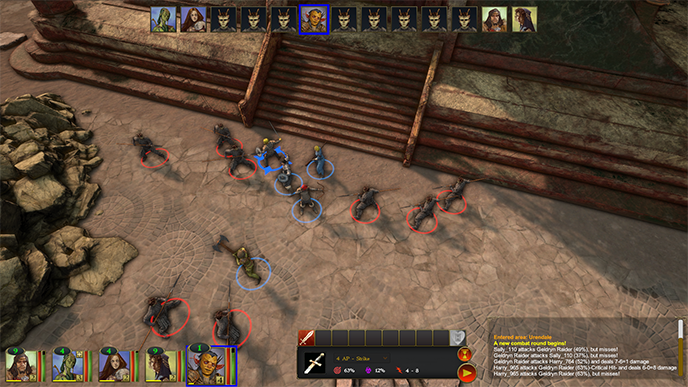 Combat is turn-based, yet fast paced. Your party will have a variety of possible actions to overcome your enemies... maybe exhaust their stamina and bid your time? distract them using a Talent, then have another character stab them? Weaken them with spells before charging in? Or, of course, just blast them out of existence with your magic, if you have that kind of power.

More about combat will be detailed in future posts, but in this one I want to outline for you the basics about party creation and advancement, and what is our plan for Early Access in this regard.

At the game start you'll create a merry band of four adventurers but up to two extra companions may join you permanently later on, so the typical party size will be six unless you choose to do with fewer. Companions are fully under your control just as any of your other characters, although they retain some autonomy during dialogues and other situations.

The character progression system is based in Experience Points and levels, but it offers great flexibility with a system based in dozens of Careers. Careers don't define your character capabilities forever; As an example, one of your characters could be a Squire, and after completing the seven levels of that basic Career, he may either decide to become a Knight, or leave behind his chivalrous aims and become a Mercenary. Every choice allows you to either specialize, or to make more versatile characters. "Completing" all the levels in a Career often offers a worthwile bonus. 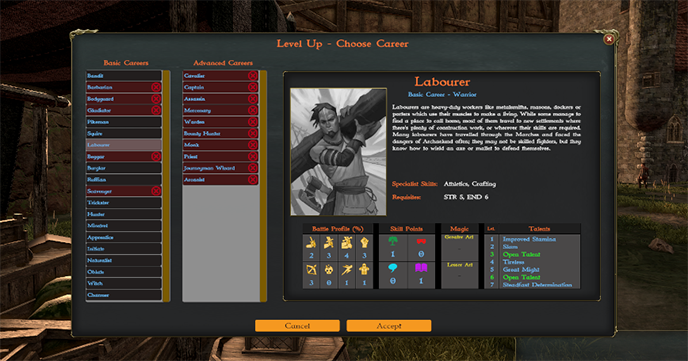 Many of the Basic Careers are not particularly "heroic": your starting party may feature Apprentice Wizards, Bandits, Labourers or Hunters. They are common men and women that want to leave behind their old lives and become adventurers. Maybe even heroes!

The Early Access gameplay will cover the first 8-9 levels of character advancement, and 21 Basic Careers will be available, plus several Advanced ones.

From now onwards I'll make more regular posts about our progress. There will be some relevant gameplay topics that will get a full update, like Combat, Skill Checks, Quests and Dialogues, Itemization, Magic and others.

A final word: Thanks for all the kind emails, for the thousands of "wishlists" of the game, and for all the posts expressing excitement about Archaelund; all of it is very encouraging for the whole team, and we can't wait to show you more!
Last edited: 15/09/2020

Very nice! I am so excited.

U.K said:
Very nice! I am so excited.

We will be very happy if the game contains connections with the Exiled Kingdoms or The Isle of Varannar
Click to expand...

Lots of that everywhere. But I'm also being careful not to make new players feel they're missing something.

It's looking so beautiful, you and your team must be proud. The combat sounds fascinating, open to endless creativity. Will there be any ownership of houses or land, can we make a mark?

RougeRogue said:
Will there be any ownership of houses or land, can we make a mark?
Click to expand...

Typical, Impiri. Not even on the continent yet and is already claiming land. May the Invisible Swamp Donkey kick you back to the land you came from.... which is the land your trying to get back to... so okay, the metaphor falls apart.....

I hear there's going to be an ultra secret way to get your own Invisible Swamp Donkey to attack enemies for you....

The world is truely taking shape. I particularly like the day/night view of the village.

I'm curious how the maps will look like (not the world map, but the local ones) and how they will be implemented. Detailed or rather sparse? Always available or do you have to buy maps at local vendors?

VDX_360 said:
Typical, Impiri. Not even on the continent yet and is already claiming land.
Click to expand...

Well, I already have three houses to sell (of course, to highest bidders), so, business first, everything else after that.

Looks fantastic. I have enjoyed Exiled Kingdoms quite a bit and I am looking forward to what is to come. Cheers to Isometric Single Player RPG's

Awesome work! Could we hope to be able to play as an ordinary human who is yet to know that he is not that ordinary(as we did in EK)?